Two hundred years ago, in May 1821, Amalie Dietrich was born in Siebenlehn. Even today, streets, squares, and places bear the name of the naturalist, who is generally known as a herbalist and adventurer. She gained scientific attention as the ›antithesis of the conventional view of science‹ due to her social advancement and her decisive scientific and ethnographic contribution during her ten-year stay in Northern Australia.

Today's presentation of Dietrich's life story is massively influenced by her daughter's biography ›Amalie Dietrich. Ein Leben‹. Although its authenticity had already been questioned at the time of its creation (and the Australian part, in particular, had been declared pure fiction), the works produced subsequently – from novels and textbooks to radio plays, comics, and an (Australian) opera – took little offence. 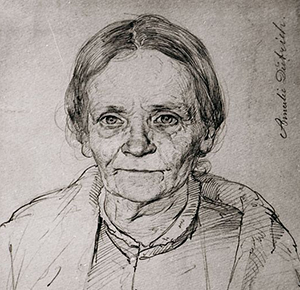 It was precisely this romantically oriented portrayal of a woman who worked her way up from simple village circumstances into the scientific world of Hamburg and, as a research traveller for Johan C. Godeffroy, made important contributions to the study of the fauna and flora of Northern Australia that made Dietrich the projection screen for a wide range of perspectives. Declared an adventurous explorer, an intrepid woman, an energetic proletarian or an unscrupulous body snatcher, Amalie Dietrich was used as a role model by various positions on the political spectrum. Her path in life, which runs counter to contemporary notions of being a woman, has since been addressed from various perspectives: from the Wilhelmine Kaiserreich and the Weimar Republic to German facism to the two Germanys and 1970s feminism to the murkiness of creationism and the current debates on the repatriation of indigenous bones.

A reappraisal of her history on the occasion of her bicentenary should therefore not be limited to Dietrich's autodidactic appropriation of education and her scientific merits. Beyond its changing reception, Amalie Dietrich's position also provides an opportunity to examine an important period in Hamburg's history, in which the interaction between trade, culture, and politics drove colonial power struggles beyond Africa and already at that time subordinated ethical boundaries to the scientific thirst for knowledge.

In the context of the current discussions about reparations for colonial injustice, Dietrich's contribution to the scientific circles of the time must also be examined in its global political context of the establishment of anthropological networks for the research and colonization of indigenous peoples.

Initial deliberations have already been and will be published: